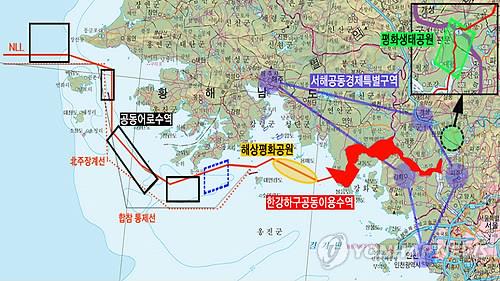 (INCHEON=Yonhap News) The leaders of South and North Korea agreed Friday to establish a peace and cooperation zone on their disputed western sea border, a move that could prevent future clashes.

The disputed sea demarcation line, which Seoul has enforced, has been the scene of two deadly naval clashes between the two Koreas since 1999.

On Friday, South Korean President Moon Jae-in and North Korean leader Kim Jong-un held a historic summit at the border village of Panmunjom and agreed to turn the area into a special region that can be used safety by both sides.

The agreement could also potentially allow South and North Korean fishermen to jointly operate their boats in the area while allowing maritime authorities crack down on illegal Chinese fishing.

North Korea has never recognized the NLL, demanding that it be re-drawn further south. Such a call had been rejected by the South, which sees the line as a buffer zone to keep the North away from its "vulnerable" western shores and ports.

In October 2007, then-South Korean President Roh Moo-hyun and North Korean leader Kim Jong-il held a summit and agreed to establish a special peace and cooperation zone in the West Sea for joint fishing, but no progress was made, as Roh was succeeded by a conservative president the following February.