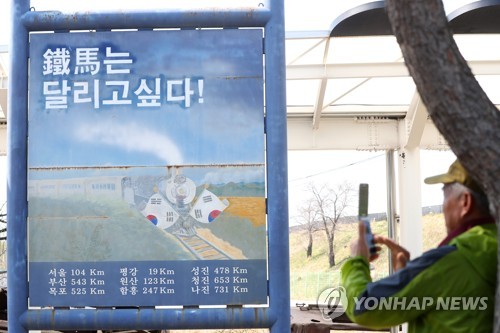 "We are working on reviews of studies done in the past, and a task force may be set up to iron out follow-up measures (to the summit)," said an official at the transportation ministry.

As part of their initial steps, Seoul and Pyongyang agreed to connect cross-border roads and railways, and upgrade the existing infrastructure. The plan includes taking practical steps to utilize the Gyeongui railway, which links Shinuiju, a city on the Korean Peninsula's border with China, and Seoul.

Talks on infrastructure could not only potentially lead to an inter-Korean railway system but also raises the possibility for the construction of airports and other critical infrastructure facilities and the development of special economic zones in the North that can benefit from outside investment.

In the two previous summits in 2000 and 2007, Seoul and Pyongyang agreed to cooperate to build a railway connecting the two Koreas, but the agreement was reneged on due to various reasons.

Government officials here said inter-Korean cooperation can be discussed as the two Koreas are expected to hold working-level talks to execute the railway construction projects.