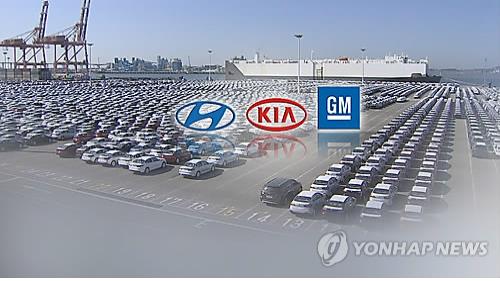 Robust sales in emerging markets and recovering demand in China bolstered the monthly numbers at Hyundai Motor and Kia Motors, the companies said. The two carmakers saw their sales in China remain weak until the first quarter following the diplomatic row between Seoul and Beijing over the deployment of an advanced U.S. anti-missile system, called THAAD, on the Korean Peninsula.

With protectionism in advanced markets and low global economic growth are expected to remain major hurdles going forward, Hyundai plans to launch the all-new Santa Fe in the United States this summer to boost sales and Kia plans to roll out its new K3 compact in the U.S. later this year.

Hyundai and Kia, which together form the world's fifth-biggest carmaker, aim to achieve a combined sales target of 7.55 million vehicles for 2018, slightly higher than the 7.25 million units they sold last year.

GM plans to shut one of its four car assembly plants in Korea this month as part of global restructuring effort. Total production volumes at GM Korea has fallen dramatically amid weak local sales of its vehicles.

SsangYong Motor, which is owned by Indian carmaker Mahindra & Mahindra Ltd., reported a 1.3 percent on-year sales decline to 10,930 units last month from 11,071 a year ago on weak local demand.

Renault Samsung's sales, on the other hand, rose 2.9 percent on-year to 23,096 from 22,444 on increased exports of Nissan Motor Corp.'s Rogue SUV, which is assembled in the carmaker's sole Busan plant, 450 kilometers south of Seoul. Renault S.A. owns an 80 percent stake in Renault Samsung.

In the January-April period, the combined sales of the five automakers inched up 0.2 percent to 2.62 million vehicles from 2.61 million a year ago, the latest data showed.