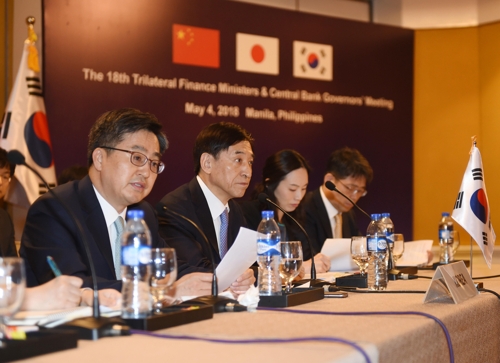 (YANGYANG=Yonhap News) Finance chiefs from South Korea, China and Japan on Friday warned against growing protectionism trends and stressed the importance of promoting an open and rule-based trade framework.

"We stressed the importance of resisting all forms of protectionism, ensuring an open and rule-based multilateral trade and investment system, and of strengthening resilience against external shocks, and agree to further enhance communication and coordination among China, Japan and Korea," they said in a joint statement released after their meeting in Manila.

The finance chiefs also said they should remain vigilant against downside risks that may threaten the recovery in the global economy. "We noted the risks posed by rising trade protectionism, faster-than-expected tightening in global financial conditions and uncertainty of geopolitical tensions," the statement said.

The three-way meeting was held on the sidelines of the Asian Development Bank's annual meeting in the Philippines.

The three countries welcomed the recent headway made in the inter-Korean summit.

"We welcome the Panmunjeom Declaration agreed to by the leaders of South and North Korea on April 27, 2018, and look forward to further progress in easing geopolitical tension in the region," the top economic policymakers said.

Last Friday, the leaders of the two Koreas held a summit at the border village of Panmunjom in which they vowed an end to hostilities, the complete denuclearization of the Korean Peninsula, and the establishment of a permanent and solid peace regime.