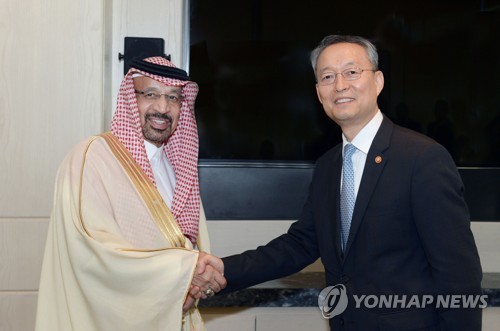 Under the economic blueprint, the Middle Eastern kingdom has been pushing to reduce its heavy reliance on oil exports, foster new industries and fundamentally reform its economic structure.

During the meeting, Paik promoted the Korean nuclear program as Saudi Arabia plans to build its first nuclear reactors as part of its future-oriented energy road map.

The lucrative deal is a second chance for South Korea to tap into the Middle East market following a US$20 billion contract with the United Arab Emirates in 2009.

The two nations have signed agreements calling for cooperation in the development and implementation of nuclear energy for peaceful purposes as the country is seeking to reduce its reliance on fossil fuel and develop a viable renewable energy sector.

In 2015, the two nations inked a memorandum of understanding to jointly promote the SMART (System-integrated Modular Advanced Reactor) in the global market.

In addition to the energy sector, they agreed to form a bilateral working group to develop Saudi Arabia's auto industry and host a bio investor forum to help Korean companies make inroads into the Middle Eastern nation, the ministry said.

The two sides also agreed to hold the second meeting of the Vision 2030 Joint Group in the fourth quarter to discuss details of potential joint projects.

Two-way trade volume reached US$21.3 billion in 2016, with South Korea exporting $5.6 billion worth of cars, electronic goods, steel and textiles to Saudi Arabia and importing $15.7 billion worth of crude oil and petrochemical products.