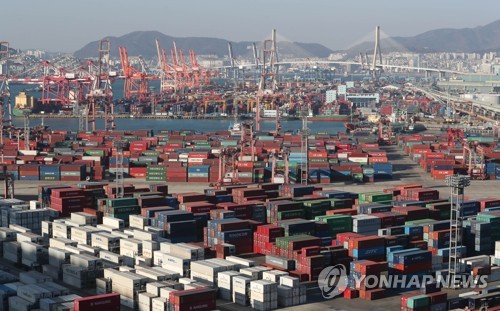 (SEJONG=Yonhap News) South Korea's exports jumped 44.2 percent on-year during the first 10 days of May on the back of brisk sales of chips and autos, customs data showed Friday.

The country's outbound shipments reached US$13.9 billion in the May 1-10 period, according to the data from the Korea Customs Service.

By product, outbound shipments of semiconductors surged 63.3 percent, with those of autos rising 187.5 percent.

On the other hand, ship exports plunged 71.2 percent, the data showed.

Imports advanced 23.3 percent to $14.1 billion, resulting in a trade deficit of around $180 million, the data showed.

The country's exports retreated in April from a year earlier, marking the first dip in 18 months, largely due to a base effect.

The government said earlier last month's outbound shipments decreased compared with a year earlier as local shipyards exported offshore facilities worth a huge $5.45 billion in April last year and companies pushed out exports ahead of the various holidays in early May 2017.