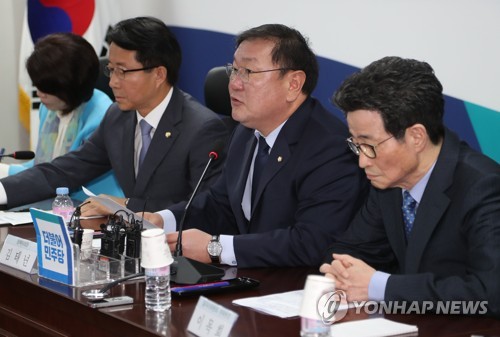 (SEOUL=Yonhap News) Senior officials from the government and ruling Democratic Party agreed Monday to set up a 120 billion won fund (US$112 million) to foster startups, which they say will help create more jobs for young people.

During a policy coordination meeting, the participants said job market conditions under the first year of the Moon Jae-in government have not improved dramatically and that the government and the ruling party should make concerted efforts to create more quality jobs.

In particular, they agreed to seek the launch of the fund aimed at helping startups and thus providing more jobs as part of a broader effort to strengthen state support for smaller firms with new recruits and provide assistance to venture startups.

The fund will increase its money pool down the road, according to them.

The country's economic growth has accelerated, and a slew of policy initiatives such as fair market competition have been carried out to some degree.

The nation's economy expanded 3.1 percent in 2017 from a year ago, when it grew 2.8 percent, marking the first time since 2014 that Asia's fourth-largest economy grew by more than 3 percent.

For this year, the economy is widely expected to expand by 3 percent on continued domestic demand recovery and robust exports.

Although a slew of economic data is pointing to a robust economic expansion this year, the country's unemployment is still a source of major concern.

But the passage of the extra budget bill has been held up as the country's political parties have been at a deadlock over some issues, such as an amendment to the Constitution and calls for the appointment of a special prosecutor to investigate an opinion rigging scandal.