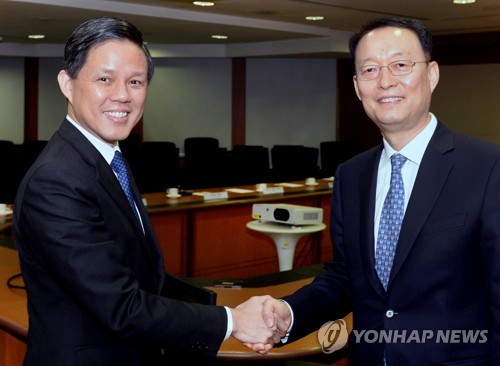 (SEOUL=Yonhap News) South Korea and Singapore have discussed ways to collaborate in renewable energy and autonomous vehicles, and agreed to promote trade and investment between the two nations, Seoul's trade ministry said Tuesday.

Paik Un-gyu, South Korean minister of trade, industry and energy, held a meeting with his Singaporean counterpart Chan Chun Sing in the Southeast Asian nation to step up cooperation in sectors related to the fourth industrial revolution and renewable energy.

The two sides discussed ways to cooperate in the renewable energy and liquefied natural gas areas and shared the need to collaborate in technological development for self-driving cars, the ministry said.

During his two-day trip, Paik visited Nanyang Technological University, a leading autonomous research university in Singapore, and a testing center for self-driving cars, to keep up with the latest development in the emerging industry.

The two officials also agreed to work together to accelerate the process of clinching the Regional Comprehensive Economic Partnership (RCEP), a proposed mega trade deal involving Asian nations, within this year.

RCEP is in essence a massive regional trade deal between 10 members of the Association of Southeast Asian Nations (ASEAN) and the six countries with which ASEAN has existing free trade agreements -- South Korea, China, Japan, India, Australia and New Zealand.

Singapore is a key member of the 10-member ASEAN and a regional leader in smart robotics and self-driving cars. It plays a leading role in the steering body for the implementation of the South Korea-ASEAN free trade agreement.