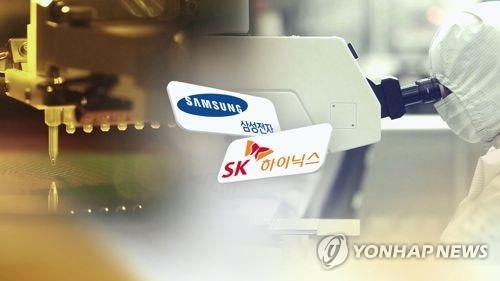 According to the data compiled by IC Insights, South Korean chipmakers were among the major winners in the first quarter. Samsung Electronics was the world's leading player, posting sales of US$19.4 billion, up 43 percent on-year.

The figure was greater than that of U.S. Intel Corp., which posted $15.8 billion in the January-March period, up 11 percent on-year.

"Intel was the number one ranked semiconductor supplier in the first quarter of 2017 but lost its top spot to Samsung in the second quarter of 2017 as well as in the full-year 2017 ranking, a position it had held since 1993," IC Insights said in its report.

Industry watchers said following the rising demand from data centers and mobile devices, the global chip market is anticipated to continue to grow throughout 2018.

The emerging Chinese players currently preparing for mass production, however, are set to spark price discounts next year, possibly leading the end of the prolonged global boom, they added.

Silicon wafers are considered the fundamental building material for semiconductors, the organization said.

"Global silicon wafer shipment volumes started the year at historic levels," said Neil Weaver, the chairman of the industry tracker. "As a result, silicon shipments, like device shipments, are positioned to be strong this year."