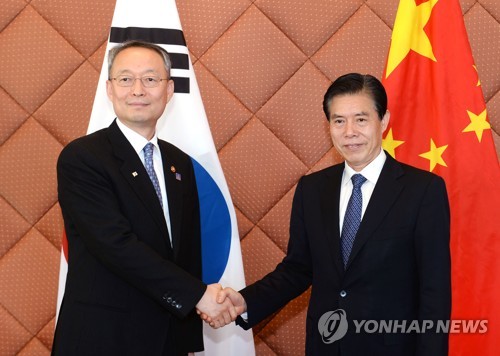 (SEOUL=Yonhap News) Industrial ministers of South Korea and China will hold a meeting in Seoul to discuss ways to expand economic cooperation and trade between the two nations, Seoul's trade and industry ministry said Wednesday.

Miao Wei, Chinese minister of industry, information and technology, will meet with Paik Un-gyu, South Korean minister of trade, industry and energy, on Thursday to talk about the latest trade and investment issues.

The high-level meeting between the two nations has been held every two years since 2014.

Seoul will bring up Beijing's policy stance of excluding electric vehicles equipped with South Korean batteries from its subsidies list, according to ministry officials. This is a critical issue for local lithium-ion battery manufacturers, such as Samsung SDI Co. and LG Chem Ltd.

Given the two firms' battery production capacity and global competitiveness, industry watchers viewed the decision as a thinly veiled retaliation against Seoul's deployment of an American missile defense system on its soil in March 2017.