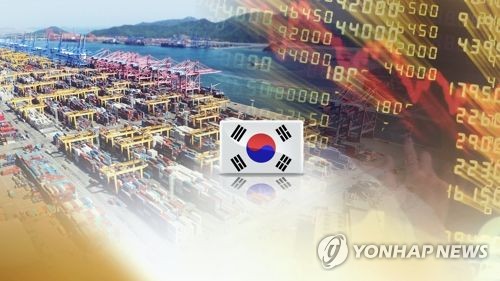 (SEJONG=Yonhap News) South Korea's economy is expected to grow 3 percent this year, the same pace forecast in March, on the back of robust exports and an expansionary fiscal mode, a Paris-based international organization said Wednesday.

For next year, the Organization for Economic Cooperation and Development (OECD) also maintained its growth forecast at 3 percent.

"Economic growth is projected to remain around 3 percent through 2019, supported by stronger export growth and fiscal stimulus that offset the impact of tighter regulations on housing and mortgage lending, which will slow construction investment," the OECD said in a report.

The organization said the South Korean government's "income-led growth strategy, driven by increased public employment, a sharp rise in the minimum wage and higher social spending, needs to be supported by structural reform to narrow large productivity gaps between manufacturing and services, and large and small firms."

The OECD said the rapid growth of government spending, in part to expand public employment, will help support domestic demand and reduce the current account surplus.

"Fiscal policy is playing a key role in Korea's income-led growth strategy ... While public employment is low compared to other OECD countries, job creation in the public sector should respond to clearly defined needs and be weighed against its long-term cost," the organization said.

The organization also said the priority is regulatory reform, focusing on services, where labor productivity is less than half of that in Korean manufacturing. "Policies to promote entrepreneurship and raise productivity in SMES are also needed to sustain growth and reduce income inequality," it added.

In regard to the country's monetary policy, the OECD said that, with consumer price inflation running below 2 percent, monetary policy accommodation can be withdrawn gradually.

The easing of geopolitical tensions related to North Korea is a positive development for South Korea, although trade protectionism remains a concern.

The OECD also pointed out the country's minimum wage hike as another risk to the projection.

"The higher minimum wage could lead to a faster increase in private consumption to the extent that it is enforced, but it could also slow employment growth and weaken Korea's competitiveness if not accompanied by productivity gains," it said.