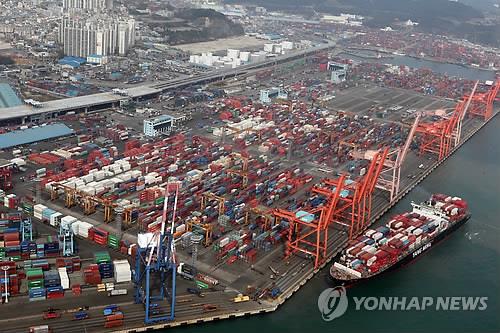 (SEJONG=Yonhap News) South Korea's exports jumped 2 percent on-year during the first 10 days of June on the back of brisk sales of chips and autos, customs data showed Monday.

The country's outbound shipments reached US$12.4 billion in the June 1-10 period, according to the data from the Korea Customs Service.

By product, outbound shipments of semiconductors surged 28.9 percent, while those of autos rose 41.4 percent. Exports of petrochemical goods climbed 43.5 percent.

On the other hand, ship exports plunged 84.5 percent, the latest numbers showed.

Imports advanced 2.4 percent to $14 billion, resulting in a trade deficit of around $1.58 million.

Last month, South Korea's exports spiked 13.5 percent from a year earlier, rebounding from a brief dip the previous month, due to a rise in prices of key products and a global boom in the IT sector.

Outbound shipments reached US$50.98 billion last month, compared with $44.92 billion a year ago, according to the data compiled by the Ministry of Trade, Industry and Energy.