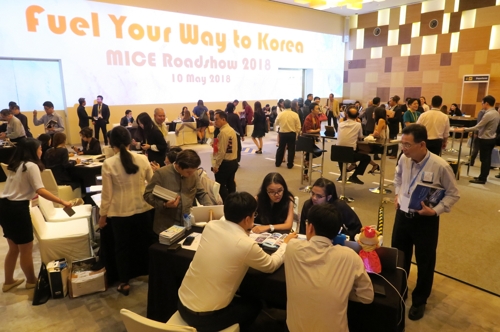 (SEOUL=Yonhap News) For the second consecutive year, in 2017 South Korea ranked No. 1 in the world in the number of international conferences hosted, official data showed Sunday.

According to Belgium-based Union of International Associations, Asia's fourth-largest economy played host to a total of 1,297 gatherings in the one year period.

This represents a market share of 12.6 percent of the 10,786 events held globally during the year, a gain of 3.1 percentage points from a year earlier.

The independent research institute based in Belgium said South Korea's standing has been improving steadily from fourth place in 2014 to second place in the following year. In 2016, it hosted 997 events.

Related to the solid placing of South Korea and local cities, the Korea Tourism Organization (KTO) said it has been making a concerted effort for over a decade to attract international conventions.

Seoul has worked to build up its meeting, incentive, convention and exhibition industry as part of efforts to bolster its service industry.