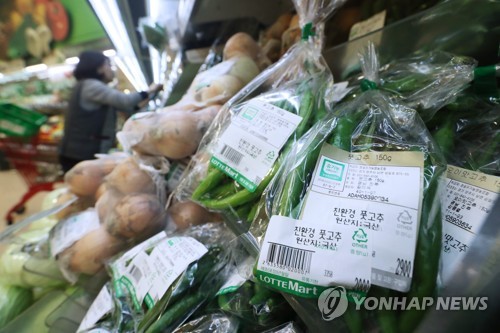 (SEOUL=Yonhap News) South Korea's exports of agricultural products and food to China soared 86.9 percent in May compared with a year ago amid improved diplomatic ties between the two nations, government data showed Tuesday.

South Korea exported US$98 million worth of agricultural products and food to China last month, up $52 million from a year earlier, the Ministry of Agriculture, Food and Rural Affairs said.

Outbound shipments to China had been sluggish since April 2017 due to a diplomatic row over Seoul's deployment of an American missile defense system earlier that year, but they have since recovered as the two nations have agreed to normalize their relations.

Shipments to China in the first five months of this year gained a solid 7.9 percent to $388 million compared with a year earlier, led by recovery over the last two months.

The ministry expected improving consumer sentiment to boost sales of agro-food products in China later this year, vowing to provide support for exporters to deal with the nation's strengthened quarantine regulations on imported food.