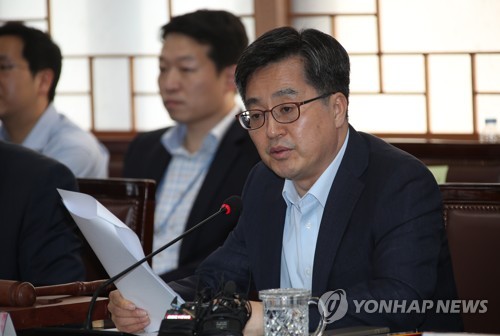 (SEJONG=Yonhap News) The government will push to overhaul the evaluation process for state-invested firms so as to help improve their trustworthiness, which has been tarnished by job-related irregularities, and boost job creation, the country's chief economic policymaker said Tuesday.

"State firms are urged to raise their productivity and effectiveness as well and play a key role in creating and spearheading a system for innovative growth," Finance Minister Kim Dong-yeon said in a meeting to review state firms' management.

The finance ministry stressed earlier that the government will seek to change state firms' ownership structures, evaluation systems and other aspects so as to allow them to seek voluntary changes.

President Moon Jae-in has called for stepped-up efforts to eradicate what he called deep-rooted and pervasive job-related corruption at public firms.

In October last year, the government launched a probe of all state-funded firms to find out if any job favors had been given to children of influential people in politics and business circles amid rising public anger over reports of illicit employment.

Earlier, 10 public firms, including Kangwon Land, a state-run casino operator, came under fire for hiring new workers at the request of influential public and business figures.

Also Tuesday, Kim held a separate meeting with business executives in Seoul and said cooperation projects involving South and North Korea as well as Russia could gain momentum if conditions are created following this week's summit between the leaders of South Korea and Russia. He did not elaborate.

South Korean President Moon Jae-in is set to meet with his Russian counterpart Vladimir Putin in Moscow on Thursday.