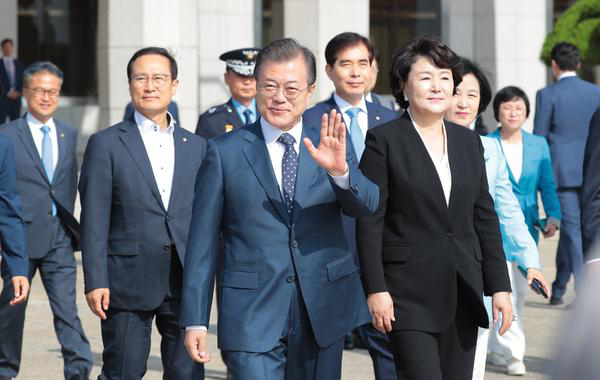 South Korean President Moon Jae-in embarked on a four-day state visit to Russia on Thursday, becoming the first sitting president to head to the Eurasian country in 19 years since late President Kim Dae-jung in 1999.

Moon will hold his third summit with Russian President Vladimir Putin since taking office in May, last year, on Friday, where he is expected to seek Russia’s strong support towards achieving complete denuclearization of the Korean peninsula and peace regime.

Moon will be accompanied by about 200 business delegates including chief executives of major large companies seeking to boost bilateral economic partnership. The delegation in particular composes of a large group of executives from companies engaged in businesses in North Korea that hope to boost inter-Korean economic cooperation projects following the historic summit between the leaders of two Koreas in late April.

On the last day of his state visit to Russia, meanwhile, President Moon will travel to Rostov-on-Don, one of the host cities for the 2018 FIFA World Cup, to watch the match between South Korea and Mexico.

By Kang Gye-man and Lee Eun-joo