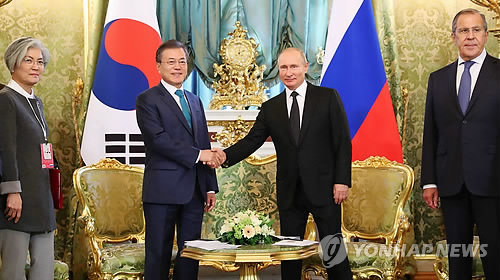 In a summit held in Moscow, the leaders agreed to initiate "local processes" to allow the start of FTA talks, Moon's presidential office Cheong Wa Dae said in a press release.

"To achieve the goal of US$30 billion in trade and 1 million in the number of visitors between the two countries by 2020, the two leaders agreed to work for practical cooperation that can actually benefit the people of the two countries," it said.

"In particular, the two leaders agreed to start local processes for the launch of FTA negotiations between South Korea and Russia in the service and investment sectors first," the press release said.

The Moon-Putin summit, the third of its kind, also focused on ways to peacefully denuclearize North Korea as it followed Moon's two historic summits with North Korean leader Kim Jong-un on April 27 and May 26.

"We two leaders have closely cooperated while sharing the common goal of complete denuclearization of the Korean Peninsula and establishment of permanent peace," Moon said at the start of his bilateral summit with the Russian president, according to Cheong Wa Dae pool reports.

The North Korean leader promised to completely denuclearize the Korean Peninsula in the two inter-Korean summits. He again affirmed his commitment to denuclearization in his meeting with U.S. President Donald Trump held in Singapore last week.

Putin vowed to continue supporting the denuclearization process, saying he and his country have always supported dialogue between the leaders of the two Koreas, the pool reports said.

Both Moon and Putin stressed the importance of cooperation between their countries.

"I believe South Korea and Russia are key cooperation partners on the Korean Peninsula and the Eurasian continent and therefore place great importance on strategic cooperation with Russia as an important part of our government's foreign and security policies," Moon was quoted as saying.

The leaders were later joined by other members of their governments for an expanded summit.

Moon will head to Russia's southern port city of Rostov-on-Don on Saturday to watch the FIFA World Cup match between his country and Mexico before returning home later in the day.