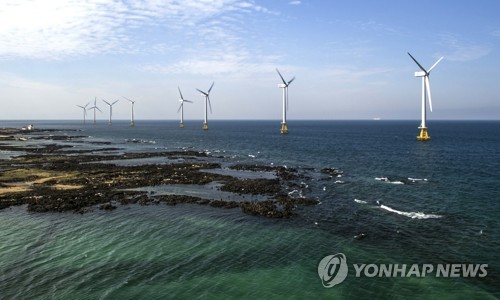 (SEJONG=Yonhap News) South Korea will add 12 gigawatt (GW) of new wind power capacity by 2030 and combine the renewable energy with the shipbuilding and ocean-based industries, the energy ministry said Tuesday.

The goal is part of the government's plan to increase the proportion of renewable energy from the current 7 percent to 20 percent by 2030. The new energy road map aims to acquire 48.7 GW of new clean energy sources, with 12 GW of them coming from wind power plants.

"The government will build wind farms in sites proposed by provincial governments and seek ways to combine them with the shipbuilding and ocean industry to boost the local economy," Paik Un-gyu said in a wind power industry forum attended by company officials, researchers and government officials.

As a first step, the government plans to establish 500 MW-class wind turbines in coastal areas and explore ways to converge them with ocean-based industries. It aims to create large-scale floating wind farms through technological innovations in the long term.

South Korea has been seeking to shift its focus from coal and nuclear energy to renewable energy to cope with worsening air pollution and address public safety concerns over aged atomic power plants.