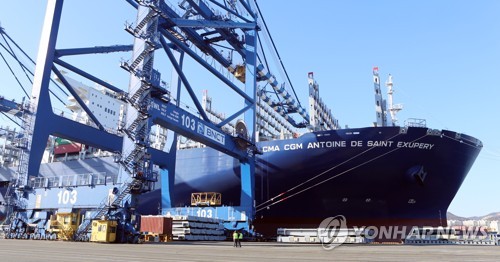 (SEOUL=Yonhap News) Cargo processed at South Korean ports increased in May compared with a year earlier as shipments of vehicles and grains rose on strong demand, government data showed Thursday.

The total volume of sea cargo reached 142.38 million tons last month, advancing 8.6 percent from a year earlier, according to the data by the Ministry of Oceans and Fisheries.

Shipments of grains jumped 55 percent on-year, and those of vehicles and machinery increased 30 percent and 18 percent, respectively.

In contrast, shipments of sand tumbled 52 percent, while steel and cement decreased 22.9 percent and 21 percent, respectively.

By country, shipments to China, the South Korea's largest trading partner, inched up 0.9 percent, while those to the United States gained 2 percent last month, helped by brisk exports of memory chips and petrochemical products.