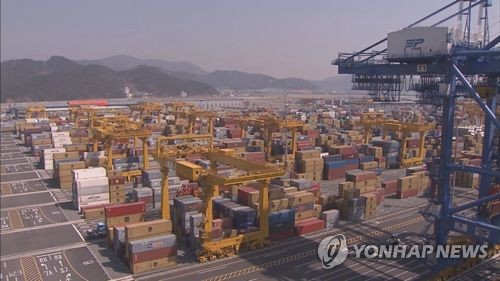 (SEOUL=Yonhap News) South Korea's exports are expected to improve overall in the third quarter, especially pharmaceuticals and cosmetics to key markets like the United States and the European Union, a survey of companies showed Friday.

The export business survey index (EBSI), put out by the Korea International Trade Association, was measured at 104.7 for the June-August period, higher than the 102.8 of the previous quarter. The survey was conducted on 1,007 exporting firms.

EBSI gauges corporate expectations about exports, with the baseline set at 100. A number above it means optimism outweighs pessimism. The index has stayed over 100 since the second quarter of last year.

Expectations were especially high for pharmaceutical and cosmetics exports to the U.S. and the EU. Petroleum and petrochemical products were also viewed as promising from import demands in China and Southeast Asia, and from a hike in unit prices. Exports for machineries were projected to increase from a construction boom and infrastructure investments in key markets.

Steel and non-ferrous metals were expected to lose from stronger trade pressure from the U.S., while shipbuilding was likely to be affected from the fall in orders last year.

The survey showed an index of 81.4 for the outlook on import restrictions and trade friction, indicating that companies anticipate this trade condition to worsen in the third quarter. The outlook was also negative for profitability (88.5) and exports price (87.7). The measurement was positive for exports consulting (104.8), shipment contracts (104.1) and the facility operational rate (100.3).

Results said 18.2 percent of the firms saw price increases in raw materials as a burden, as well as pressure from buyers for lower prices (13.8 percent) and volatility in the local currency (13 percent).