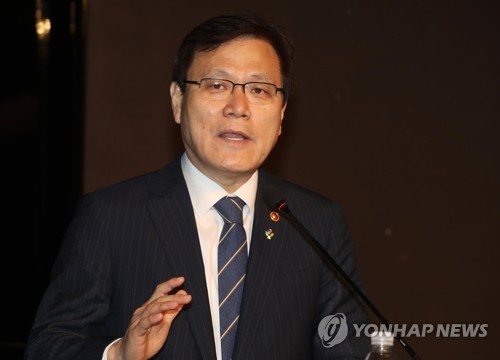 (SEOUL=Yonhap News) The government plans to actively promote intellectual property financing to make it easier for venture startups and smaller firms to raise funds by using their ideas as collateral, the top financial regulator said Friday.

Choi Jong-ku, chairman of the Financial Services Commission (FSC), made the remarks at a conference on intellectual property financing in Seoul earlier in the day.

"The government will make more effort to permit companies to use their core assets and intellectual property in financing," Choi said in a speech.

In order to reduce risks of defaults, the government will enable financial institutions to assess the value of patents in a more precise manner, Choi said.

The FSC unveiled a set of measures in May to allow companies to secure loans using their movable assets, including intellectual property and half-finished goods, as collateral.

Under the measures, intellectual property, as well as a company's claims to future sales, can be used as a means to secure loans, the FSC said.

A lack of collateral is one of the main reasons banks reject loan requests from small companies, the regulator said.