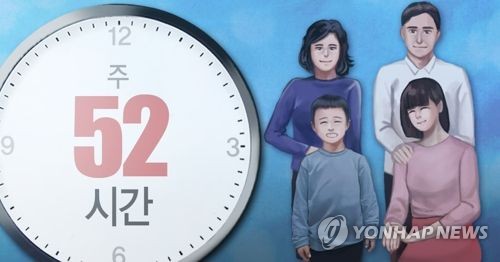 Starting this month, companies with 300 or more employees have been forced to reduce the maximum working hours to 52 hours per week from the current 68 hours. Companies will be given a six-month grace period.

Paik Un-gyu, minister of trade, industry and energy, said the government will closely communicate with companies to help them cut back working hours without sacrificing productivity or leading to a fall in salaries for employees.

"I encourage more companies to participate in reducing working hours that can promote work-life balance and increase employment," Paik said during a visit to a medium-sized semiconductor company in Hwaseong, southwest of Seoul. "We will expand wage subsidies for companies that create jobs and make efforts to help the new system take root in the early stage of its implementation."

Under the new system, companies with over 300 employees will be eligible for up to 600,000 won (US$538) in state support per new employee. Smaller companies that voluntarily reduce the weekly working hours would receive up to 1 million won of monthly wage for each newly hired employee.

The reduced working hours, while benefiting some sectors, could be detrimental to others, some market watchers say. There have been worries that manufacturing, construction and certain parts of the retail sector could suffer a setback, at least in the short run.