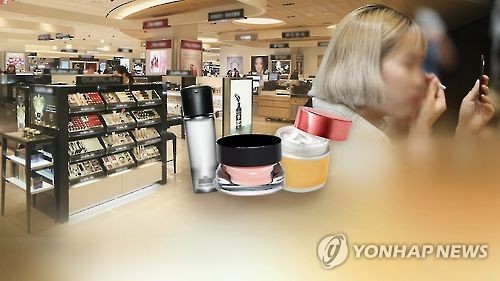 (SEOUL=Yonhap News) South Korea's cosmetics trade surplus surpassed the 4 trillion won mark (US$3.58 billion) for the first time in 2017 on the back of the growing popularity of Korean pop culture abroad, the government said Thursday.

The trade surplus of South Korea-made beauty products came to 4.26 trillion won last year, up 18.5 percent from 3.6 trillion won tallied the previous year, and more than double from 1.7 trillion won in 2015, according to the Ministry of Food and Drug Safety.

It was the sixth consecutive year for the country's cosmetics exports to have exceeded imports, with the outbound shipments' average growth rate in the last five years standing at 40.1 percent, according to the ministry.

China was the largest importer of South Korean cosmetics items last year, despite the diplomatic dispute over Seoul's deployment of THAAD, a U.S. missile defense system.

Outbound shipments of beauty products to the world's second-largest economy came to $1.93 billion, followed by Hong Kong with $1.2 billion and the U.S. with $445 million, it said.

The ministry attributed the robust growth to "hallyu," or the Korean Wave, noting that its exports portfolio has been diversifying to include Southeast Asia and Europe.

Meanwhile, South Korea imported $325 million worth of cosmetics items from France during the cited period, and another $291.3 million from the United States and $1.82 million from Japan.