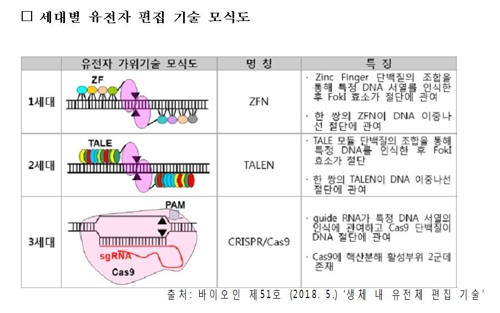 (DAEJEON=Yonhap News) With the current developments in gene editing technology, the ability to rework a person's genetic blueprint is becoming a reality.

Genetic editing is a technique that freely changes the DNA structure at a specific position in the genome. Genetic scissors, which are artificial DNA cleavage enzymes, is a representative technology.

The third-generation gene scissors, known as CRISPR, was ranked number 1 for innovative technology by Science Magazine in 2015, and is considered to be the core biotechnology of the 4th Industrial Revolution.

According to the Korean Intellectual Property Office (KIPO) on July 8, patent applications related to genetic editing, which enables the genetic correction of plants and animals, have been increasing in recent years.

As gene editing technology is combining with 'synthetic biology,' a new technology for designing living organisms, the number of applications is expected to increase even more in the future.

Looking at trends by applicant in recent 10 years, the number of applications filed by domestic and foreign applicants was 138 (41%) and 159 (59%), respectively.

Looking at recent trends for patent applications in the last 10 years, the number of applications filed by domestic and foreign applicants were 138 (41%) and 159 (59%), respectively.

Most of the foreign applicants are from the large number of multinational pharmaceutical companies conducting R&D in Korea.

More over, applications for platform-based technology for genetic editing have skyrocketed since 2012, when the third-generation gene scissors were first developed, reaching a peak in 2014 and gradually declining.

On the other hand, applications for gene editing application technology have continued to increase since 2012.

Also, the direction of research related to gene editing technology is changing for application in disease treatment or biological redesign.

Domestic patent applications have increased dramatically, suggesting that the development of Korean technology to treat genetic diseases and incurable diseases is not far off.