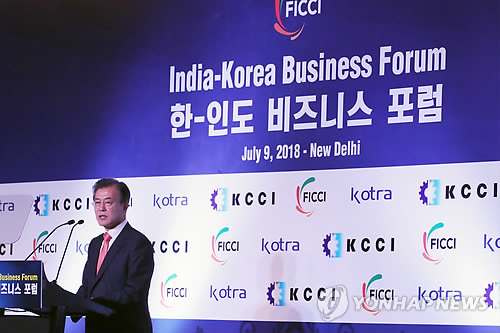 "India and South Korea are the world's seventh and 11th largest economies. However, trade between the two countries came to US$20 billion last year, which is not small but far short of our expectations," President Moon said during a South Korea-India business forum attended by some 400 top business leaders from both countries.

Moon said the countries share many common values while both their governments pushed for what he called the "3Ps" -- people-oriented peace and prosperity.

"First of all, I wish to propose to India a '3P Plus' by adding future-oriented cooperation to our existing 3P policy," he told the forum.

The business forum was held one day before the South Korean president was set to hold a bilateral summit with Indian Prime Minister Narendra Modi.

"They have mostly been centered around automobile, electronics and textile companies so far, but the country will expand its business cooperation to various other areas, including shipbuilding, medical equipment and food processing," the president said.

The president also expressed hope for South Korean companies to take part in major infrastructure projects in India, such as the move to build 100 smart cities and industrial corridors between major cities here.

"South Korea has been accumulating advanced technology and vast experience in developing infrastructure and new cities throughout its own industrialization process. The vast network of expressways and spider web-like subway systems are the symbol of such achievement. I am confident South Korea is the best partner for India," he said.

Moon insisted technology cooperation between the two countries will also create new opportunities for both countries while also preparing the two for the fourth industrial revolution.

"When India's world-class software technology is combined with South Korea's strong applied technology and hardwares, the two countries may be able to spearhead the era of the fourth industrial revolution," the president said.

He also asked Indian companies to invest in South Korea, saying the ongoing rapprochement between his country and North Korea may lead to new opportunities.

"South Korea is currently facing a historic transition. We have opened a way to the establishment of peace through the South-North Korea summit and North Korea-U.S. summit. Once peace is established, investment conditions in South Korea will improve and many new business opportunities may be created," the president said.