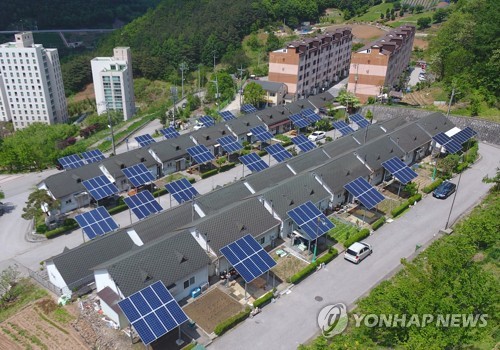 Asia's fourth-largest economy saw the trading value of power generated from renewable energy come to 2.05 trillion won (US$1.82 billion) last year, up 20.1 percent from the previous year, according to the data from the Korea Power Exchange.

It was the largest amount since the exchange started to compile related data in 2001. That year, the value of those transactions stood at a mere 50 billion won.

Last year's tally took up 4.6 percent of the country's electricity transactions between power companies and the Korea Power Electric Corp. (KEPCO) worth 44.8 trillion won. The percentage was also a record high.

Given that it is difficult to include by-product gas, biomass and IGCC in the category of renewable energy, South Korea only generates around 30 percent of its electricity from clean energy, they said.

President Moon Jae-in has made clear his government's plan to scrap the building of new nuclear power plants and phase out those already in operation as they reach the end of their life cycles. Nuclear power plants account for one-third of power generation in South Korea, which has 24 nuclear reactors.