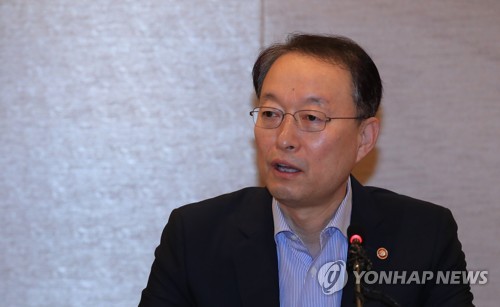 (SEOUL=Yonhap News) South Korea's industry minister on Monday vowed to actively cut down regulations for innovative projects as major companies remain reluctant to launch big projects and to hire employees amid uncertainties in the global economy.

Paik Un-gyu, minister of trade, industry and energy, made the pledge in a meeting with CEOs of 12 major companies, including Samsung Electronics Co., Kia Motors Corp. and LG Chem Inc., the first such meeting since he took office a year ago.

Paik promised the government will closely communicate with industry leaders to cut red tape to encourage new projects and the development of emerging technologies, stressing their critical role in the South Korean economy and job market.

The policymaker's meeting with CEOs of top companies signaled the government's shift in tone on the nation's big business groups, also known as chaebol, which have been investigated over a series of corruption scandals and unruly behavior by descendants of some company owners.

The Moon Jae-in administration has vowed to carry out reforms of the family-run conglomerates under the slogan "fair economy", but the high youth unemployment rate and rise in offshore production have raised calls for promoting a business-friendly environment for industry leaders.