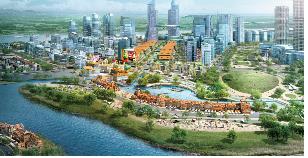 (SEOUL=Yonhap News) South Korea on Monday announced a blueprint for the administrative hub of Sejong and the southeastern port city of Busan to be test beds for the realization of smart cities.

Various innovative technologies, ranging from unmanned vehicles to facial recognition systems, will be adopted in parts of the two urban areas to make them into world-class smart cities, the Presidential Committee on the Fourth Industrial Revolution said.

The detailed plan was announced by Chang Byung-gyu, the head of the committee, and Minister of Land, Infrastructure and Transport Kim Hyun-mi in Digital Media City, a high-tech complex in western Seoul.

The 274-million-square-meter district in Sejong, a city in central South Korea, will be developed under the themes of energy and transportation that will utilize unmanned vehicles, according to the committee.

The vision for the Sejong smart city is to provide a sustainable platform that brings happiness to citizens, the committee said.

The 219-million-square-meter area in Busan, the country's second largest city, will be focused on global logistics under the theme of new future life centered on nature, people, and technology, it said.

The city will feature a four-kilometer road based on the city development technology called Low Impact Development that mimics natural processes to protect water quality.

"Smart city is a platform that embodies various fourth industrial revolution technologies and will act as a new growth engine for our economy," Chang said in a press release, adding that the government will make administrative efforts to successfully carry out the plan.

The Moon Jae-in administration has been focusing on boosting burgeoning industrial sectors, such as self-driving cars, drones, robots and financial technology, or fintech, which are deemed potential new growth engines for Asia's fourth-largest economy.