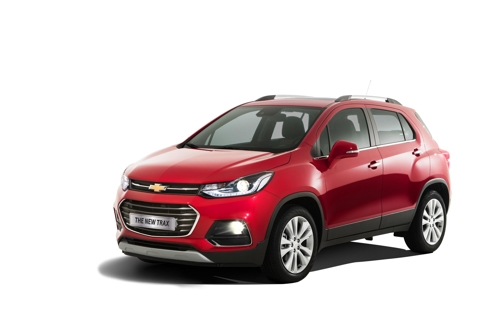 (SEOUL=Yonhap News) General Motors Co. will invest US$50 million (57 billion won) to expand its main plant in South Korea as it strives to put its loss-making Korean unit back on track, GM Korea Co. said Friday.

GM, which owns a 77 percent stake in GM Korea, will make the investment for the expansion of its plant in Bupyeong, just west of Seoul. It will increase the facility's output volume by 75,000 units to 430,000 units by next year, the Korean unit said in a statement.

The Trax compact SUV, which is currently being assembled in the No. 1 Bupyeong plant, will be produced in the expanded No. 2 Bupyeong plant as well. The investment will also be spent to hire 100 new engineers, bringing GM Korea's total engineering workforce to over 3,000, a company spokesman said.

"These new investments are in addition to the $2.8 billion announced in May to build two all-new vehicles in Korea, as well as the $2.8 billion to restructure the company's balance sheet, which has already been completed," GM Executive Vice President Barry Engle said in the statement.

In May, GM and the state-run Korea Development Bank (KDB), the two biggest shareholders in GM Korea, signed an agreement to permit a combined 7.7-trillion-won lifeline -- 6.9 trillion won from GM and 810 billion won from the KDB -- to keep the loss-making Korean unit afloat.

Under the binding deal, GM Korea plans to launch 15 new or face-lifted vehicles, including the two global products that will be allocated to GM's Korean plants, in the domestic market in the next five years. Last month, the upgraded Spark minicar and the Equinox SUV were launched.

A compact SUV and a crossover utility vehicle are expected to be allocated to GM's three Korean plants -- two in Bupyeong and one in Changwon -- at the end of 2019 and in 2022. The Changwon plant, 400 kilometers south of Seoul, has a capacity of 210,000 units.

GM Korea plans to strengthen its lineup with more Chevy crossovers in order to have SUVs account for some 60 percent of total sales in five year's time from the current 14 percent.

In the statement, Engle said GM is "proceeding with its plans to establish in Korea a GM International regional headquarters for Asia Pacific markets, excluding China." He didn't elaborate on the headquarters plan.

GM Korea President and Chief Executive Kaher Kazem said the new investments will add to the progress the company is making on its plan to be profitable and sustainable in Asia's fourth-biggest economy.

"We have launched new products, like the new Spark and Equinox, and achieved our best monthly sales this year in June. We have almost doubled our market share in the past three months," he said.

GM Korea's market share improved to 6-7 percent in the second quarter from 2-3 percent in the first quarter, the spokesman said. The company once nearly reached a share of 10 percent in the domestic passenger car market.