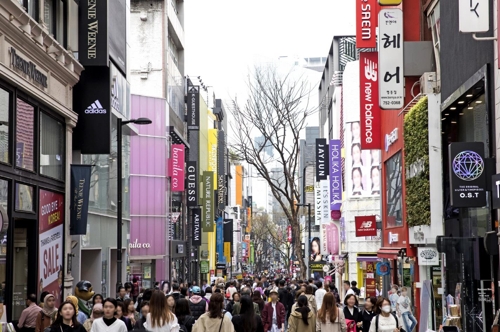 (SEOUL=Yonhap News) The number of foreigners who traveled to South Korea in the first half jumped 6.9 percent compared with a year earlier helped by a solid increase in Japanese visitors, government data showed Monday.

A total of 7.22 million foreign tourists visited South Korea in the January-June period, up from 6.75 million in the year-ago period, the Korea Tourism Organization (KTO) said in a statement.

"The number of Japanese travelers (to South Korea) jumped 18 percent in the first half to 1.31 million on the back of eased tensions in inter-Korean relations and the reignited popularity of K-pop in Japan," the statement said.

In addition, there has been a rise in incoming Chinese tourists since the second quarter after Seoul and Beijing agreed to resolve diplomatic differences following the deployment of an advanced U.S. anti-missile system, called THAAD, last year, the KTO said.