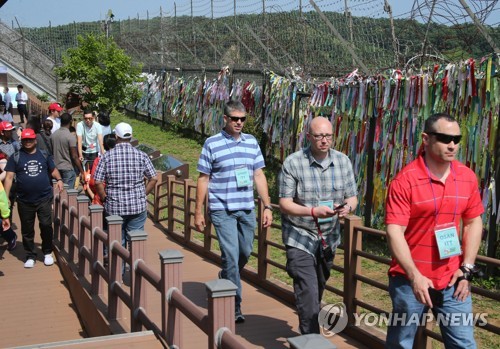 (SEOUL=Yonhap News) The number of foreign tourists to South Korea spiked nearly 30 percent in June from a year earlier on eased inter-Korean tensions and more visitors from China, a state tourism agency said Wednesday. A total of 1.28 million foreigners visited South Korea last month, up 29.3 percent from the same month a year ago, according to the Korea Tourism Organization (KTO). The number of Chinese tourists shot up 49 percent on-year in June due to a base effect. In March last year, China banned group tours to South Korea in retaliation for Seoul's deployment of a U.S. missile shield. The ban was lifted later that year. The number of visitors from Japan surged 40.2 percent, with that of tourists from the rest of Asia and the Middle East climbing 24.3 percent. Visitors from Taiwan jumped 31.9 percent in June from a year earlier, with the number of tourists from Hong Kong rising 12.9 percent. The number of visitors from Europe, the United States and the rest of the world went up 6.2 percent on stable inter-Korean relations and increased interest in the Korean Peninsula following the June 12 summit between the U.S. and North Korea. Meanwhile, the number of South Korean overseas tourists came to 2.32 million in June, up 10.8 percent from a year ago, according to the KTO.