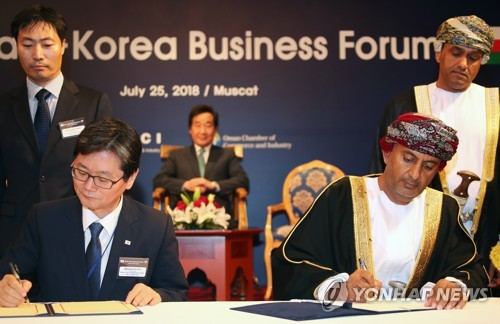 (MUSCAT=Yonhap News) South Korea and Oman clinched a preliminary deal Wednesday to cooperate in building a smart city at a special economic zone in the Gulf country, a move that could help Korean firms' participation in development projects.

The deal calls for Seoul to share its experience and know-how with Muscat in setting up the smart city at the economic zone in Duqm, a port town in the country's central-eastern area.

Oman is the third and final leg of Lee's weeklong trip to Africa and the Middle East that included stops in Kenya and Tanzania. The main purpose of his trip is to bolster economic and business ties with the countries.

The special economic zone in Duqm is being developed to diversify Oman's national economy. It houses eight main areas, including a port, an oil refinery and the residential, commercial and tourism area, according to the website of Duqm Special Economic Zone Authority.

The deal was widely expected to be inked in September, but the schedule was advanced as Oman's deputy prime minister for external relations proposed an early contract signing during Lee's trip.

"In particular, we hope that South Korea can become the main partner in developing the special economic zone in Duqm," he said.

The prime minister voiced hope that South Korean firms can participate in projects in many areas, including the petrochemical industry, electricity and smart cities.