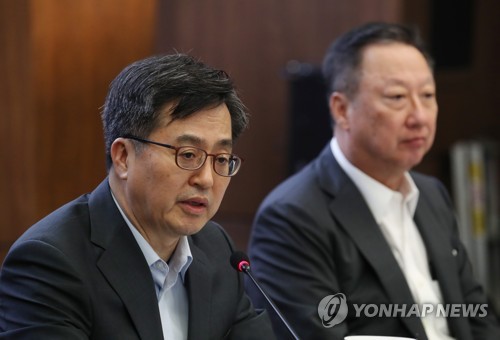 Last week, President Moon Jae-in vowed to care more actively for small business owners and other self-employed people amid growing complaints from them in the wake of a minimum wage hike.

Kim acknowledged that self-employed business owners have taken the brunt of sluggish consumption amid rising costs, such as rental fees.

The government will draw up more plans to give tax incentives for self-employed business owners, the policymaker said.

According to the ministry, the government plans to raise real estate taxes in a move that will reduce the widening income gap and promote a more equitable levying of taxes.

The property tax hike centers around raising the tax burden on owners of high value houses and multiple homes and increasing the taxable value of a property.

Under the plan, the so-called comprehensive real estate tax rate for properties valued at 600 million won (US$535,000) or below will remain unchanged at the current 0.5 percent. But the rate for a property priced above this limit will be raised by between 0.1 percentage point and 0.5 percentage point, with the maximum rate raised to 2.5 percent from the current 2 percent.

The ministry also said it will seek to mark up the taxable rate of a property, which is now 80 percent of the government-set value. The rate should climb gradually to 90 percent by 2020, the ministry said.

As part of efforts to support the underprivileged and expand the social safety net, the government will increase tax refunds for low-income households.

In particular, to help cushion difficulties, the government will sharply expand the number of those who can benefit from the earned income tax credit (EITC) scheme, which refunds taxes to low-income families, and increase the financial support it provides, according to the ministry.

The ministry also said the expanded tax refund scheme may be financed with the expected additional 3.4 trillion won of tax revenue estimated for next year following the rise in income tax rates.

Also, all stock index-related derivatives will be subject to capital gains taxation, the ministry said.

In order to boost job creation, or maintain quality jobs, the government will provide an array of tax incentives to companies in regions or cities hit by corporate restructuring.

The ministry said it plans to raise taxes on coal while cutting the tax burden on LNG consumption as part of an effort to reflect social costs such as pollution.

The ministry said it plans to end a corporate income tax reduction for foreign investment in free economic zones and other special industrial zones.

The ministry estimated that the latest tax code revision will have the effect of a 2.5 trillion-won reduction in tax revenue over the next five years should the revision be approved by the National Assembly without changes.

The government will submit the tax revision bill to the National Assembly on Aug. 30, the ministry said.