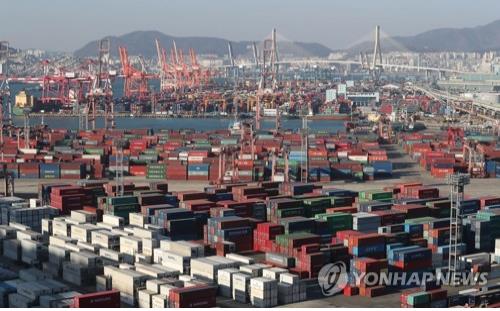 Outbound shipments rose 6.2 percent on-year to reach US$51.88 billion last month, marking the second-largest monthly figure, according to the data compiled by the Ministry of Trade, Industry and Energy.

The reading also marks the first time that the country's monthly exports topped the $50 billion mark for five straight months, the ministry said.

In June, the country's exports inched down due to fewer working days and a high base effect.

The cumulative exports of Asia's fourth-largest economy rose 6.4 percent to $349.1 billion in the first seven months of the year, the highest to date, the ministry said.

Average daily exports stood at $2.16 billion in July, up 4 percent from a year earlier, marking the rise for the third consecutive month.

Shipments of semiconductors jumped 31.6 percent to $10.38 billion last month on upbeat sales of high-value memory chips and storage devices in major markets, including China and the United States.

Overseas sales of petrochemical products rose 24.1 percent to exceed $4 billion for eight months in a row for the first time, aided by strong demand and rising oil prices.

In contrast, exports of vehicles declined 13.5 percent due to sluggish sales in the North American market and expanded production in overseas factories.

Outbound shipments of ships continued to fall diving 73.4 percent in the face of tougher competition from Chinese rivals and a global supply glut.

Shipments to Vietnam rose a solid 7.7 percent, with those to the European Union spiking 7 percent.

But exports to the ASEAN countries and India fell 1.6 percent and 5.4 percent, respectively, the data showed.

The industry ministry said a global economic recovery, coupled with stable prices of key export items, will help the country's outbound shipments remain robust, but it cited rising trade protectionism in major economies and volatility in the global financial market as potential risks.