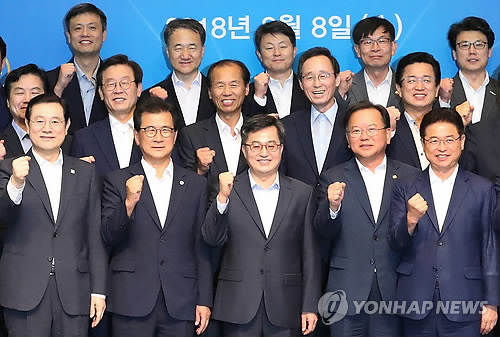 (SEJONG=Yonhap News) South Korea's government plans to increase its spending for convenience facilities and social safety infrastructure as part of an ongoing effort to boost quality of life and the domestic economy, the finance ministry said Wednesday.

According to the ministry, over 7 trillion won (US$6.26 billion) will be spent next year to construct more electric vehicle charging stations, smart factories and community gyms.

The figure is up 1 trillion won from the budget earmarked for this year.

The measure came after President Moon Jae-in ordered the government to boldly expand its spending on new infrastructure projects that are closely related to public welfare and new jobs.

Such projects, he said, may help realize three government objectives of creating new jobs, improving the livelihoods of the people and promoting the balanced development of the nation.

Earlier, Finance Minister Kim Dong-yeon said the government will review the current plan to slash a budget for social infrastructure next year.

The budget earmarked for social infrastructure is set at 19 trillion won for the year, down from 22.1 trillion won in 2017.

In a meeting with local governors in this administrative city, Finance Minister Kim Dong-yeon said at least 5 trillion won will be spent for key leading sectors, such as autonomous driving, next year.

"The government is taking a close look at the platform economy which combines key infrastructure technologies from diverse sectors," Kim said.

The minister urged administrators to actively pursue innovative growth policies, with the potential budget to be reflected in next year's spending plan.

The ministry said earlier that state-led companies plan to spend over 30 trillion won in eight key leading sectors by 2022, thus creating an environment for private companies to seek innovative growth.

Innovative growth is one of the key economic goals sought by the Moon Jae-in government, along with income-led growth.

The government earlier unveiled a set of support measures to boost innovative growth by providing funding and other incentives to eight key sectors, such as smart farms, smart cities, fintech, drones and electric vehicles and artificial intelligence.

The government said it will also take drastic measures to ease regulations that have been blocking new industries and technologies from moving forward.