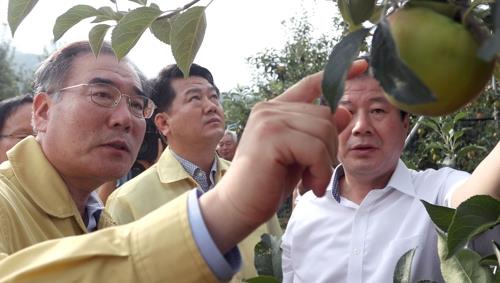 Lee Gae-ho, minister of agriculture, food and rural affairs, said the government will expand financial and technological support and incentives to facilitate young people's entry in the farming business.

"I will support the agriculture and food industry to create quality jobs for young people," Lee said during an inauguration ceremony held at the government complex. "I will seek measures to increase farmers aged under 40 from the current 1 percent of the total to 2 percent within 10 years."

The aging farming population is a serious problem, as only 11,000, or 1.1 percent of farmers, are under the age of 40, and it is expected to shrink to 0.4 percent in 2025 if the current trend continues, according to the ministry.

To meet the goal, Lee vowed to create a "smart farm innovation valley" to create synergy between farmers, companies and research institutes to develop value added agricultural products and the bio industry.

"We will combine advanced technologies to innovate the agriculture and food industry," Lee said. "The government will encourage more young people to start farming and food businesses by creating industry clusters and startup labs."

South Korea has grown from a predominantly agricultural nation into an industrialized country in a relatively short period of time, with a heavy focus on manufacturing and trade. The agriculture sector accounted for just 2.2 percent of the nation's gross domestic product in 2016, data by the World Bank showed.