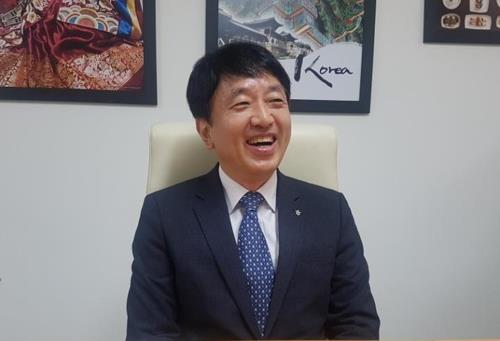 (SEOUL=Yonhap News) The head of South Korea's tourism promotion agency has vowed to turn major cities in the country into key tourism sites, with an aim to achieve qualitative growth of the industry within his four-year term.

Ahn Young-bae took office in May to lead the Korea Tourism Organization amid fallout from the sharp drop in the number of tourists following a diplomatic row between Seoul and Beijing over a U.S. missile defense system.

As the Chinese government banned its tour companies from selling Korea-bound package tours in March last year, the total number of inbound tourists fell 3.9 million in 2017 compared with the previous year.

"The country's tourism industry is having difficult times, and its competitiveness in terms of quality is also rather weak," Ahn said during a recent interview with Yonhap News Agency in Seoul.

Ahn proposed developing regional cities into tourist destinations as one of the most urgent tasks to strengthen the industry.

"We need to disperse foreign tourists to cities other than Seoul through improved infrastructure and attractive content," he said, adding around 78 percent of inbound tourism marketing is currently concentrated in the capital city.

Ahn also said he will expand the luxury tourism market and diversify the country's tourist portfolio, which has heavily relied on Chinese visitors.

"Normalization of the number of Chinese tourists is important, but we will also actively attract visitors from Southeast Asia and Muslim countries to diversify our tourist portfolio," he said. "In order to actively welcome Muslim tourists, we need to increase the number of halal restaurants and improve facilities for them."

Halal food refers to products that are prepared in a specific way according to Islamic Sharia law, which covers not only meat but also fruits and vegetables.

The tourism promotion agency's aim is to attract 1 million Muslim visitors this year, up from around 860,000 tallied last year.

It also aims to raise the number of Chinese tourists to the 5 million level, which has nearly halved from 8.07 million in 2016 to 4.17 million last year.