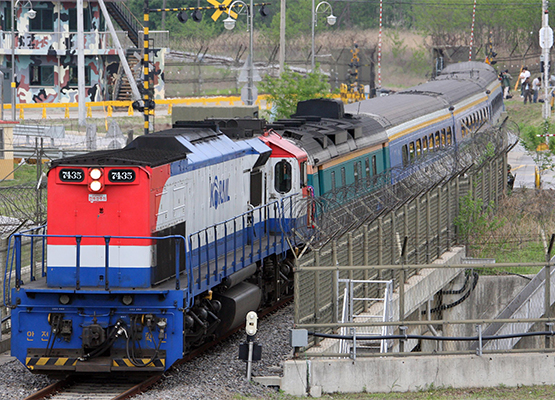 South Korea can become a major global distribution hub once railway linking South and North Korea boosts trade in Eurasia and the Pacific Rim, experts said on Tuesday. There will also be more opportunities for logistics companies to expand business.

Officials from the government and logistics companies Tuesday held a conference on the theme of “Reconnecting Asia” under the auspices of the Korea International Trade Association and U.S. Center for Strategic and International Studies in Seoul, timed with the third inter-Korean summit held in Pyongyang.

Attendees highlighted the symbolic meaning of linking South and North via railway as well as its economic impact. President Moon Jae-in envisioned trans-continental rail connection for eventual EU-like regional economic integration in his Liberation Day address in August. Railway project was the first and only economic venture the two Koreas acted out from the April 27 summit agreement.

The Korea Railroad Research Institute said that distribution channel between the two Koreas is blocked at the moment but once railway connects to transit point Busan in addition to Seoul-Pyongyang, countries in the region will benefit by saving time and cost. Cargo transport will be immediately feasible once agreement is made on the matter, the institute said.

It also noted that there has been an increase in added value over the past decade given significant improvement in railroad infrastructure in Northeast Asia. A Korean logistics company could gain huge traction in global campaign from the rail connection in East Asia.

Hyundai Glovis Co. also said that railway linking South and North Korea will allow the company to manage business more efficiently. Currently, the company ships products to container vessels at Busan Port and sends them to Vladivostok before trans-shipping them via Trans-Siberian Railway (TSR). The Najin-Hasan railway will allow direction connection to TSR, which will enhance convenience and save costs.

By Moon Ji-woong and Lee Eun-joo