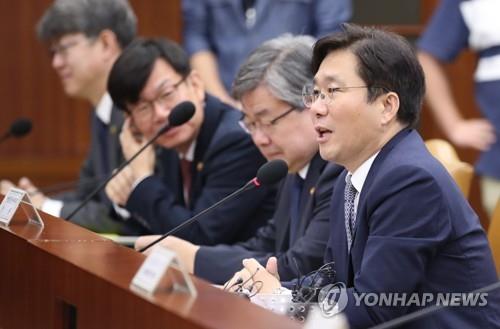 Sung Yun-mo, the new chief of the Ministry of Industry, Trade and Energy, stressed "innovation-led growth" to revitalize various businesses, such as automobiles and shipbuilding, and foster new growth drivers in Asia's fourth-largest economy.

"We have to shift the focus from quantitative growth to qualitative growth to increase productivity," Sung said in an inauguration ceremony held at the government complex in Sejong. "The government will create an organic business ecosystem by easing regulations, expanding support and creating demand in the public sector in emerging sectors, including bio and health and renewable energy."

Sung said the government will play the role of "support tower" to help the private sector lead innovation in new businesses and help startups in promising sectors.

"We will connect the government, companies, universities and research institutes to maximize their capacities and create synergy between them," the policymaker said.

As South Korea and the United States formally signed the revised free trade agreement earlier this week, Sung said the government will prepare follow-up processes to get the deal ratified by the parliament.

The minister also pledged to bolster efforts to expand footholds in promising new markets, including Southeast Asian nations, India and Russia, to tackle rising protectionism in the wake of simmering trade disputes between the U.S. and China.

On energy, Sung said the government will create a sustainable energy mix under the energy transformation policy, which aims to raise the ratio of renewable energy to 20 percent by 2030 and gradually phase out nuclear power.

Currently, South Korea operates 24 nuclear reactors that generate about 30 percent of its electricity. Under the nuclear phase-out plan, the nation's 10 oldest reactors will be retired by 2030 as their operational life cycles expire.