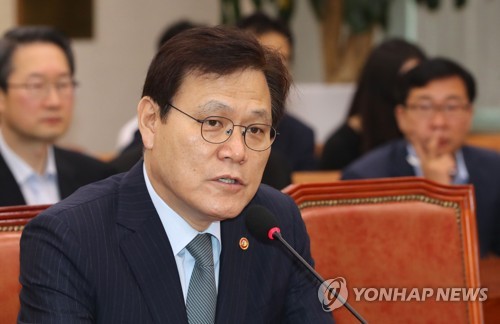 Choi Jong-ku, chairman of the Financial Services Commission (FSC), made the remarks as the state-run Industrial Bank of Korea opened a startup incubator at one of the bank's branches in Seoul earlier in the day.

The venture incubator aims to help early-stage firms set up by young people by housing them and offering financial and consulting services.

The FSC will also encourage young entrepreneurs to start businesses in the financial technology sector, Choi said in a statement.

Last month, the government launched a 3 trillion won (US$2.7 billion) fund to invest in promising startups.

The government has unveiled a set of support measures to boost innovative growth by providing funding and other incentives to eight key sectors, such as smart farms, smart cities, fintech, drones and electric vehicles and artificial intelligence.

The government said a total of 300,000 jobs will be created by 2022 under the support measures for innovative startups.