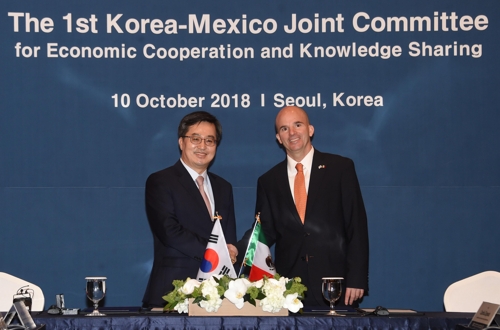 Mexico is South Korea's second-largest trading partner in the American region after the U.S.

The two also agreed to work together to fight growing trade protectionism through cooperation at the G-20 Finance Ministers and the International Monetary Fund (IMF) meetings.

The economic chiefs of the two countries also shared the view that the two sides should cooperate in the fintech industry, which is viewed as a future growth engine.

The South Korean minister, meanwhile, thanked Mexico for its support for Seoul's associate membership for the Pacific Alliance (PA).

South Korea has been in talks with members of the PA for associate membership in the Latin American trade bloc.

The PA members are Mexico, Chile, Colombia and Peru.

As South Korea has already signed free trade agreements with the other three nations but not Mexico, its PA membership would be tantamount to a similar trade deal with Mexico, the largest economy within the alliance.

Last year, Singapore, Australia, New Zealand and Canada were accepted as associate members by the PA, which accounts for about 2.5 percent of the world's gross domestic production.