Canadian International School to be Established in Donghae
Date
2018.10.24
Views
563 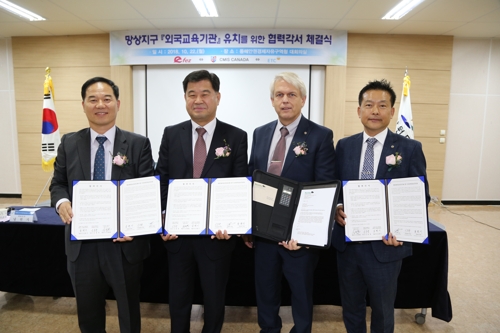 At the signing ceremony, an officer in charge of approving international school from the Ministry of Education in Manitoba, Canada, also participated.

According to the agreement, CMIS will carry out licensing process necessary for the establishment of the campus as planned, and EFEZ Authority will provide administrative support.

The Ministry of Education in Manitoba operates eight international schools in seven countries.

CMIS Incheon Songdo global campus was approved and established as the sixth international school to be approved by Manitoba in September 2009.

EFEZ Authority explained that CMIS has licensed teachers approved by the Ministry of Education in Manitoba and the students may receive the same graduation certificate as those in Canada.

"If an elite international school of Canada is established in the district, the resident environment of foreigners will be improved, and we expect to attract more investment and foster global talents," said Shin Dong-hak, head of the Authority. "We will try to establish the school as soon as possible by providing active administrative support."