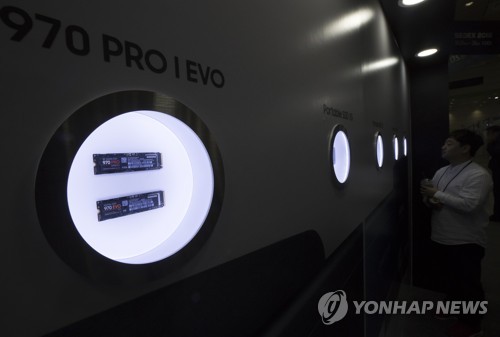 (SEOUL=Yonhap News) South Korea's semiconductor exports in 2018 surpassed $100 billion in mid-October on the back of strong global demand, becoming the backbone of Asia's fourth-largest economy, the industry ministry said Thursday.

It took 24 years to increase the amount by tenfold, with accumulated sales surpassing the $1 trillion mark after the government began compiling related trade data in 1977.

Samsung Electronics Co. and SK hynix Inc., the world's top two chipmakers, have posted robust earnings in 2018 on strong chip demand for mobile devices and servers, but the prospects going forward are not overly rosy amid a slowdown in growth in the new year.

China's bolstering efforts to develop its semiconductor industry to reduce its reliance on imports also poses risks to their market outlook in the mid and long term, market observers say.

Highlighting the tech giants' success and their challenges ahead, Industry Minister Sung Yun-mo vowed to expand support to upgrade the key industry's competitiveness.

"South Korea's semiconductor industry should continue to challenge to lead the global market and respond to the changing business environment, amid intensifying competition with rivals in the United States and China," the policymaker said in a release. "The government will play the role of support tower to help companies lead innovation."