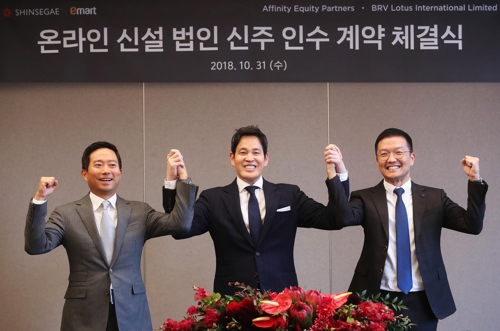 Under a deal signed earlier in the day, two private equity funds in Asia -- Affinity Equity Partners and BRV Lotus International Ltd. -- will acquire new shares to be issued from Shinsegae's new affiliate for online business.

The move underscored Shinsegae's efforts to expand its e-commerce business in a country where a growing number of consumers shop online for items ranging from clothes to electronic goods.

The new corporation -- set to be launched by March 2019 -- will be composed of online divisions to be spun off from Shinsegae Department Store and discount store chain operator, E-Mart Inc.

Shinsegae plans to make a big investment in logistics to raise the new affiliate as the business group's core retail channel that generates 10 trillion won in sales by 2023.

In addition to two logistics centers near Seoul for its online business, Shinsegae is currently building another logistics center in Gimpo, west of Seoul, which is set to begin operations in the second half of next year.

"If Shinsegae Department Store and E-Mart have been leading our group's growth up till now, it will be our new online unit that plays the role from now on," Shinsegae Group Vice Chairman Chung Yong-jin said in a statement.

Shinsegae's e-commerce business has been posting double-digit growth since the launch of an integrated online mall for its subsidiaries, SSG.COM, in 2014, it said. The online platform logged 2 trillion won in sales in 2017.

The total value of transactions made with computers, smartphones and tablets reached a record 9.05 trillion won in August, up 19.6 percent, or 1.48 trillion won, from a year earlier, according to data from Statistics Korea.