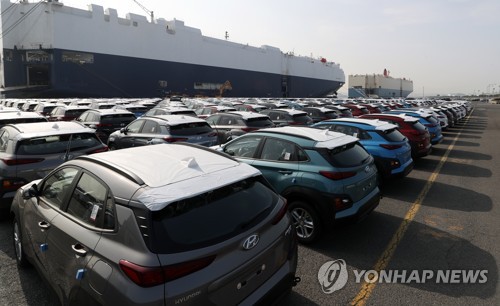 The outbound shipments of vehicles reached 230,086 units worth US$3.92 billion in October, up a sharp 32.2 percent compared with a year ago, according to the data by the Ministry of Trade, Industry and Energy.

The rise was attributable to the longer working days as the Chuseok holiday fell in October last year. The numbers were further bolstered by strong demand for new SUVs and eco-friendly cars.

Among cars shipped abroad, electric vehicles made up the fastest growing segment, with their overseas sales reaching 20,000 for the first time last month.

The number of cars produced in the nation also soared 36 percent in October as there were five more working days compared with a year ago.

Domestic sales of vehicles moved up 23.6 percent to 160,881 units in the one-month period.