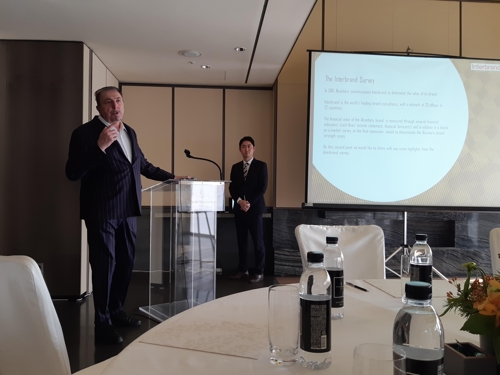 (SEOUL=Yonhap News) The CEO of Italian luxury fabric manufacturer Alcantara S.p.A. said Monday the company will increase partnership with South Korean companies as it moves to expand its presence in the global market.

The Italian firm has been making inroads into the Korean market for the past two to three years through its collaboration with local sofa brand Torre. It has also been collaborating with major automakers, such as Kia Motors Corp., the country's second-biggest carmaker by sales.

"In general terms, we are facing good opportunity in the Korean market. This is a market that has a very interesting potential, even though it is not as big as China," Alcantara Chairman and CEO Andrea Boragno said during a press conference in Seoul.

"The consumers are pretty much educated, they like quality, they like brand, they like 'made in Italy,' so we are facing good opportunity to grow in the market," he said, adding that more collaboration with local fashion brands will come down the road.

Boragno said the company is committed to increasing its brand awareness globally.

"When we approach partners in the Korean market, such as Hyundai, we have to be able to explain that our brand is also present in China, Japan and the U.S., which are all important markets for their business," he said.

The company said it aims to spend some 300 million euros (US$340 million) over the next five years to double its production capacity.

Founded in 1972, 90 percent of Alcantara's production is exported.