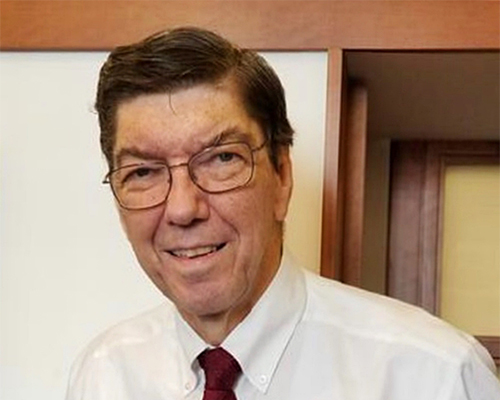 “My hope for Korea is for it to realize there are more ways to grow,” Christensen said in an exclusive interview with Maeil Business Newspaper. “Making products simpler and more affordable, that is where real growth is created.”

A world-renowned business guru, Christensen is the Professor of Business Administration at Harvard Business School who famously coined the term “disruptive innovation” in his massively influential book, The Innovator’s Dilemma.

Christensen opened the interview by sharing his Korean name, Ku Chang-seon. He went on to explain, in fluent Korean, that he had earned the name during his time as a missionary in Korea from 1971 to 1973.

“Korea was very poor when I was there but the people’s hearts were huge,” he recalled.

After decades of explosive growth, Korea is now a major industrial power, home to some of the world’s biggest conglomerates like Samsung and LG.

He advised Korean companies to invest more in market-creating innovations, which are innovations that break into previously untapped markets by making complicated and expensive products simpler and more affordable. This is what he calls disruptive innovation and where most of the growth comes from.

He took the example of LG Electronics in India’s refrigerator market. While LG is a dominant player in India, it only serves 20 percent of the Indian population as 80 percent don’t have fridges. “LG is sitting on this great opportunity and needs to target this new market,” he said.

For Korea, he also recommended four areas where the country is well-suited to pursue disruptive innovation: entertainment, healthcare, education and family.

Christen said he was “blown away” by his recent trip to South Korea but that even as people have become more prosperous, they didn’t seem as happy. “There is a certain oneness about Korea that I miss,” he added.

By Sohn Jae-gwon and Kim Hyo-jin