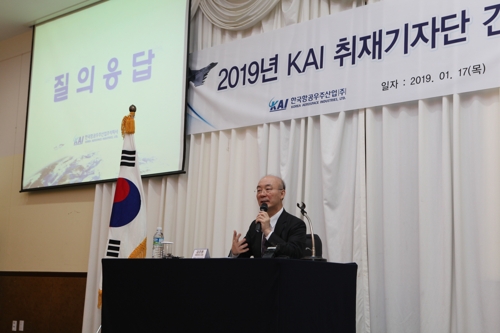 KAI presented a "aerospace industry development strategy" during a press conference at the Air Force Hall on January 17.

CEO Kim Jo-won said "what we desperately need is to build a mutually beneficial model through cooperation between the government, local governments, and industries to realize the aerospace industry development strategy," adding that "by maintaining key technologies and bolstering competitiveness, we will drive the growth of the aerospace industry".

KAI added 110 business partners last year, bringing the number of partners up to 330.

The global aerospace industry is expected to experience a stagnation in the defense market, while expecting a continued growth in the civilian side due to global economic growth and increased trade.

KAI also seeks to become a "super tier-1" enterprise in aircraft body manufacturing, and pursue the development of civilian commercial aircraft of Korean brand in tandem with the growth in the civilian market.

It will develop core technologies of new aircraft jointly with partner companies, and work out development plan for a mid-sized civilian airplane with less than 100 seats under Korean brand fitting for the Korean peninsular and Asia.

Also, it plans to diversify Unmanned Aerial Vehicle (UAV), which is likely to see a rapid growth in demand upon the advent of the fourth industrial revolution, and pioneer a future Personal Air Vehicle (PAV) market.

KAI, upon its 20th anniversary of the establishment this year, designated this year as a new start for "survival and sustainable growth," and announced that it will lay the foundation for growth and solid management by upgrading management system, expanding growth engines, and strengthening core capabilities.

KAI used to depend on the defense industry in the early days after establishment in 1999, but managed to set up a balanced structure with national defense accounting for 40%, and commercial aircraft exports and civilian airplane body manufacturing making up 60%.

It normalized its operation by reforming management systems, resuming the mass production of Surion and increased new orders. As of last year, its order backlog reached KRW 19 trillion.