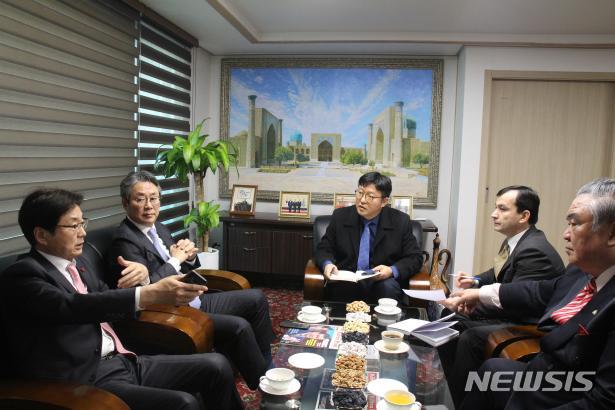 Korean and Uzbekistan agreed to facilitate exchanges and cooperation in the pharmaceutical industry.

KPBMA announced on January 24 that the two sides agreed, during the meeting between Chairman Won and ambassador Vitaliy Fen at Uzbek embassy in Seoul on January 23, to sign a MOU later this month to bolster cooperation and exchanges in the pharmaceutial industry.

Chairman Won said "we believe that Uzbekistan offers favorable environment to Korean pharmaceutical companies, and will be a cooperative partner. We also expect the Uzbek government to consider support measures."

Uzbek's pharmaceutical market amounts to about KRW 6 trillion, continuing to record about 6% of annual growth rate on average since 2015, capturing attention as a base to enter the CIS region. The Uzbek government recently selected the pharmaceutical industry as a sector to focus its efforts, endeavoring to build the infrastructure to create a business-friendly environment and attract investment.

KPBMA will take follow-up measures in laying the basis for Korean pharmaceutical companies to enter the CIS market building on the discussion with Uzbek's ambassador.