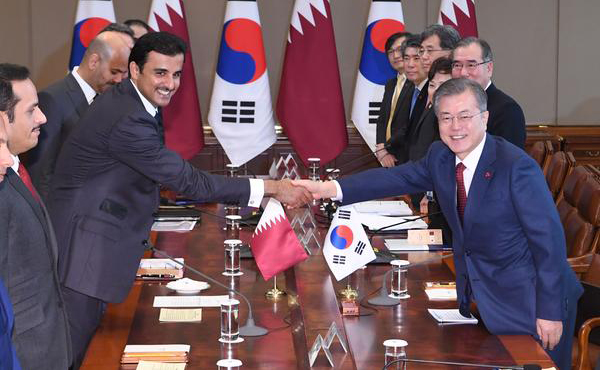 South Korean shipyards have gotten their hopes up at the prospect of bringing home multibillion-dollar orders for 60 supersized liquefied natural gas (LNG) tankers from the Qatari government after summit talks between leaders of the two states in Seoul.

The summit between the two leaders has heightened expectations that Korean shipbuilders could land the mega deal with Qatar.

Qatar is the world’s largest supplier of LNG, with an annual production of 77 million tons. Last year, it announced it would further ramp up its annual capacity to 110 million tons by 2023-2024 by building four liquefaction trains.

In line with its major expansion plan, Qatar has been taking action to bolster its fleet of LNG carriers.

Qatar Petroleum is expected to order 60 LNG carriers with a capacity of 210,000-266,000 cubic meters, which are 30 percent larger than regular LNG tankers. Each costs more than $200 million, meaning the deal could be worth at least $12 billion.

“Most of Qatar’s 50 LNG carriers were produced by Korea’s top three shipbuilders,” said Chung Sung-lip, chief executive of DSME, who attended the luncheon after the Monday summit. “This is why we believe Qatar will turn to Korea for the new order.”

Korea’s big three shipbuilders had swept all of the proposed LNG carriers from Qatar from 2004 to 2007. They demonstrated their prowess again last year, grabbing 66 out of the 70 LNG carrier orders placed worldwide.

Korea imports 31 percent of its total LNG volume from Qatar.

By Park Yong-beom and Kim Hyo-jin